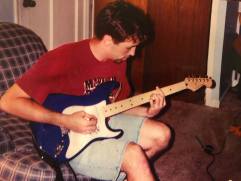 The guitar that started it all

In December 1998, I walked out of Mars Music Center in Parkville, Maryland with an empty wallet in my back pocket, the keys to my parents’ brown Mercury Cougar in one hand, and my first electric guitar in the other. I felt unusually vulnerable as I stepped off of the curb at the strip mall and strode across the street towards the car. No guitar case, no gig bag. Nothing to protect my brand-new indigo blue Mexican-made Fender Stratocaster from all sorts of dangers, real and imagined.

I hurried to my car, careful not to stumble as I stepped onto the median that separated the street from the parking lot. I lifted the guitar up high as I shimmied through the row of bushes. I swung the guitar out wide as I opened the ponderous passenger side door. I cradled the guitar gently as I laid it across the back seat. I buckled it in, careful not to let any of the metal parts on the buckle touch my guitar’s paint job. I climbed into the driver’s seat and adjusted to rear view mirror so that I could see the guitar napping in the back.

I backed out of the my parking space and drove home, dreaming of all of the Mark Knopfler licks that I would play with my new Strat. Except I didn’t know the word “licks” yet. I really didn’t know much of anything about the guitar, other than a scale or two and a handful of chords. I certainly didn’t know any of the guitar slang like “licks” or “riffs.” I had just started playing the guitar in the summer of 1998, just a few months earlier, between my freshman and sophomore years of college. I started by purchasing an acoustic guitar from Dundalk Music Center in June of 1998. By Christmas time that year, I wanted to rock. So the morning after Christmas in 1998, I drove home with my first Strat, purchased with every last penny that I had.

That Strat was the only electric guitar that I’d own for the next 10 years. Yes, that means that I was a monogamous electric guitar player for 10 years. Most of who I am as a guitar player was established on that first Strat. Countless hours practicing and jamming on that Strat has made that instrument feel right to me. Comfortable and familiar. No other guitar feels this way.

Despite my loyalty and love for that Strat, I treated it very poorly, rendering it useless for many years. After a serendipitous conversation with a friend, student and master woodworker in October 2018, I began entertaining the idea of restoring the Strat to a playable state. 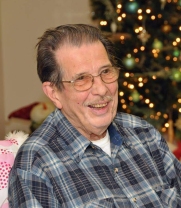 In 1995, three years before I walked out of the music store with my Strat, my Grandpop was celebrating the end of a 40 year career at Bethlehem Steel with a retirement party at the Wise Avenue Volunteer Fire Department Banquet Hall in Dundalk, MD. He was surrounded by friends, family and peers. Some of those guests called him “Grandpop,” others called him “Dad,” some called him “Ollie,” but most called him “Bud.”

His name “Bud” was a fitting nickname. He was friendly to everyone and made an honest attempt to get along with every person that he met. When he made friends, he made them for life. It’s rare to find someone say a cross word about Grandpop, and that’s a fact that I find surprising.

I don’t find it surprising because he was mean spirited. He certainly wasn’t unkind in any way. Rather, I find it surprising because he, unlike me, wasn’t afraid to engage in controversial conversations with strangers or new acquaintances. He wasn’t careful with his words; instead, he was honest and blunt. More often than I would ever dare to, he would challenge you, often with out-of-the-blue questions like “what do you think about Trump?” or “do you believe in God?”

When my Grandpop did that, he was simply measuring you up. He wanted to see how honest or real your response would be to a battering ram of a question. That’s because my Grandpop did not suffer phonies or fakes. He was the real deal, and he expected you to be as well.

So it always struck me as odd that I’ve never heard about someone having a quarrel with my Grandpop. Surely a man that could be so direct and honest would be an attractive friend to some and a nuisance to others. But, no. He seemed to always find common ground and remain fair. For that, people respected him.

Even if his brusque nature turned you off, his other qualities pulled you back in. He liked to joke and laugh. He liked to eat and tell stories. He loved God and read his bible often. He loved to work with his hands and create practical things for people. He loved to help others.

He was rough and tough on the outside, but soft on the inside. 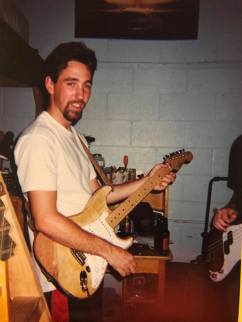 His main hobby was building things. He built two vacation homes. He built a sun room on his house. He built a bathroom on the first floor of his elderly neighbor’s row home. He built a dorm room loft for me and my college roommate, Eric. It was a sturdy wooden platform that allowed us to put our beds on top of it and fit more furniture beneath it. Eric and I had the only room in the building with a couch and a Foosball table. The loft was designed to be assembled and disassembled every semester. It was well-made and even had a custom ladder.

Impressively, my Grandpop learned how to do all of that by just jumping in and doing it. He was confident and extremely smart.

Through the years, I often noted that my Grandpop and I didn’t have much in common. I’m sensitive; he seemed impervious to insult or injury. I’m introverted; he loved nothing more than a house full of people. I’m an atheist; he was a believer. I love to read all sorts of books; the only book that I’m aware of him reading is the Bible (aside from books on how to build things.) I love music, playing and listening; I’ve never seen him turn on a radio and he certainly never played an instrument.

I pulled the soldering iron away from the joint as curls of smoke dissipated into the air and up my nostrils. The doorbell rang again and Pam scurried to the door. I stayed in my seat this time.

I looked down at the mess that I had gotten myself into. The wires, solder, pickups and pots. I was starting to see the patterns in the chaos, how the signal was going to flow. It was starting to make sense.

I prodded the nest of steel wool and flux with the tip of my soldering iron, cleaning off the old solder, preparing for the new.

Perhaps Grandpop and I weren’t so different, after all, I thought. Here I was, doing things to my guitar that most people wouldn’t have tried on their own. They would have handed it over to a pro. But I wanted to do it myself, to learn how to do it myself by doing it myself.

I looked down beneath my feet at the slate tiles that I laid one by one on the kitchen floor a few years ago. That too I learned by doing. I thought about that computer in my office. I built that too, and the two computers that I had before it. I learned how to do it by doing it.

It occurred to me that I build things too. Kitchen floors, computers and now, a guitar.

Yeah, I thought, he and I weren’t so different after all.

One response to “My guitar and my Grandpop – Part 2”